On My Love for Terry Pratchett

This is more of a note-to-self kind of post than anything else.  A list of Terry Pratchett books I’ve read, a list of ones I haven’t and overall excitement about the one I’m going to read next after stumbling upon this amazingly well-written review.

Still to be read — it’s a delightful feeling knowing there are so many left! My wallet is not so delighted.

I think it’s pretty clear from the list that my favorite Pratchett characters are the witches and the Night Watch (is it weird that I have a crush on Sam Vines?). I have a particular soft spot for Tiffany Aching — The Wee Free Men is my favorite Pratchett book partly because it was gifted to me randomly for my birthday a few years ago, thus re-igniting my love for Pratchett. And then last year, the Tiffany Aching novels helped me endure a bout of very bad stomach flu during which the only thing that kept me distracted from the pain and endless vomiting (TMI?) was a brown-haired pre-teen witch and her unshakeable common sense.

She opened her eyes and then, somewhere inside, opened her eyes again.
She heard the grass growing, and the sound of worms below the turf. She could feel the thousands of little lives around her, smell all the scents on the breeze, and see all the shades of the night.
The wheel of stars and years, of space and time, locked into place. She knew exactly where she was, and who she was, and what she was.
She swung a hand. The Queen tried to stop her, but she might as well have tried to stop a wheel of years. Tiffany’s hand caught her face and knocked her off her feet.
“Now I know why I never cried for Granny,” she said. “She has never left me.”
She leaned down, and centuries bent with her.
“The secret is not to dream,” she whispered. “The secret is to wake up. Waking up is harder. I have woken up and I am real. I know where I come from and I know where I’m going. You cannot fool me anymore. Or touch me. Or anything that is mine.”

One of my favorites is Reaper Man, a book so compassionate, so thoughtful, so filled with meaning that I defy any literary snob to read it and then disparage ‘genre fiction.’ How I hate that term. Even though I use it sometimes, out of necessity.

What can the harvest hope for, if not for the care of the Reaper Man?

And next up? This: 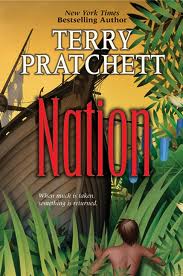 I’m saving it though, until I finish sitting for the GRE. Does anyone else use books as a reward?