In Which I Read and Drool and Contemplate My Increasing Age 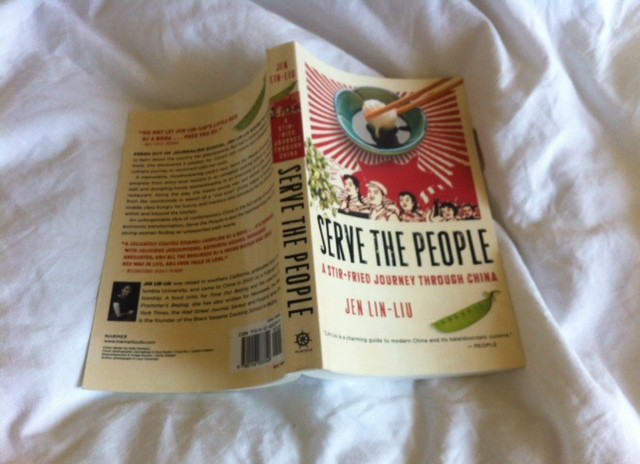 The first time I went to Black Sesame Kitchen, a small private kitchen here in Beijing, I was extremely apprehensive. Oh, not about the food, which I had heard was scrumptious (people need to bring back this word and retire delicious) but because it was to be a communal dinner. Just me, my boyfriend and about twenty other strangers squished into a small room, eating dinner family-style (single plate on table, all chopsticks dig in). I fully expected it to be terrifying, since I am about as sociable as a hermit crab (a species which I envy and have put in an application to be reincarnated as).

Anyway, long story short, I ended up really enjoying myself and (gasp) making some very respectable small talk that I was quite proud of — small talk being one of those things that I am emphatically not good at. Afterwards, the nice lady who seemed to be running the show came out holding a few books. A gleam came into my eye. Stir fried shitake mushrooms and red-braised pork belly are all well and good, but books? Books are my thing yo, so out of the way y’all.

The book turned out to be Serve the People: A Stir-fried Journey Through China by the founder of Black Sesame Kitchen, Jen-lin Liu. Unfortunately, the few copies available for sale at the time were snapped up by my fellow diners and I, alas, owing no doubt to being exhausted from my valiant small talk efforts, failed to secure a copy.

Fast forward a couple of months and after taking my parents there when they visited me in Beijing, I was once more determined to locate a copy for my mom, who likes recipes and who, incidentally, is such a slow reader that her cost-per-page (see here) makes her book purchases some of the best bargains I have ever seen.

Anyway, I finally found a copy at the Beijing Bookworm and, after paying for it (with a wince. 398 RMB for two paperback books? With prices like this no wonder people would rather watch TV!), I spent a whole afternoon lounging on a pristinely white hotel bed in my parents’ serviced apartment, simultaenously reading and drooling.

The book opens with Liu in the middle of a cooking school class in Beijing, where she is not allowed to actually cook anything and her teacher and classmates try to figure out why she looks Chinese but calls herself American. Then it follows her to a noodle-stall where she arduously learns how to make Shaanxi knife-cut noodles (which are delicious btw), and then on to a dumpling house where she meets what can only be described as a madam-like character. Then she interns at a luxury Shanghai restaurant, for what honestly sounds like a rather douchebaggy boss. Interspersed are recipes for dishes which, while I personally love, will probably never attempt at home since the intricacies of Chinese cooking are way beyond my skills, which consist of simmering everything in tomato sauce and pouring it over spaghetti.

To be honest, it wasn’t so much the cooking and food bits of the book that I liked, but the parts where she meets people and talks about them in-depth. I particularly loved reading about Chairman Wang, Liu’s unofficial cooking teacher who becomes her friend and who I recently learned still teaches and cooks at Black Sesame Kitchen.

Reading the book, it occurred to me that I always feel slightly envious of people who move to China and get absolutely absorbed into the life here (and then write books about it that get published *shakes fist at heavens*). They make friends with locals, have adventures, eat weird food, explore bizarre parts of the city and seemingly never, unlike me, get utterly bored of China. Sick, yes, everyone gets sick of China from time to time —- sometimes physically, violently, projectile-ly so. But my own ‘expat’ life here consists of everyday things like oh, working at my job, commuting on the subway, complaining about commuting on the subway, paying my rent, getting bathroom leaks fixed, arguing with the boyfriend about who should stay home to make sure the bathroom leaks get fixed.

You know, life things. Yes, I’ve eaten some weird stuff, including sheep’s balls (another post, another day), but really, having an office job and an apartment and a regular yoga studio and a commute means that my life in Beijing is structured pretty much like everyone else’s life, everywhere else.

It’s hardly the stuff of ‘I went to China and had adventures and wrote a book’ grand narratives. And in a way, that’s what I expected when I moved here. I’ve never been an adventurous person (did the hermit crab envy not tip you off?), but I’m getting older and with that comes the realization that there is only a limited time left to try the few adventures that I do want to try, like grad school or living in Paris alone or taking the Trans-siberian. I turn 26 at the end of this month and in four short years, I’ll be 30 — still young, but let’s face it, there is a clock and with every year that passes it starts ticking louder and faster.

So where to next? As Tolkien says, “And whither then? I cannot say.”

← Why I Started a Book Blog
Is Writing Meant to be Fun? →